The last book in C. S. Lewis’ Chronicles of Narnia called, The Last Battle, portrays different responses when a person believes something is true that later is learned to be false.

Now hard times had come on Narnia, and many Narnians were enslaved to the Calormen – although the Ape (a stooge for Tash, the Satan character) wants to convince them they are not enslaved. Ape mocks the Narnians as being naive for thinking they are enslaved and says, “Tash is only another name for Aslan [the Christ character]. All that old idea of us [Narnians] being right and the Calormenes wrong is silly. We know better now. The Calormenes use different words but we all mean the same thing. Tash and Aslan are only two different names for you know Who.... Get that into your heads, you stupid brutes. Tash is Aslan; Aslan is Tash.” Lewis is describing a situation where good and evil are so mixed as to be allegedly the same, and anyone who thinks otherwise is mocked.

Now Ape has made the donkey to unwittingly play a role in this deception. At one point in the story the donkey, named Puzzle, realizes he’s been duped and says, “I see now that I really have been a very bad donkey. I ought never to have listened to [the Ape].” One of the children begins to blame and say “If only you ...” – but another of the children interrupts and says, “It was all a mistake; wasn’t it, Puzzle dear?” And she gives him a kiss. Lesson #1: blame, berating, and what if’s do nothing helpful. When one sees his mistake and confesses it, then it is time for mercy, compassion, and love.

Then news comes that the Calormenes have overtaken Narnia and it is no more. Those remaining face their last battle. (A image of the end of the world.) Now there is the doorway which, at the time, they don’t realize goes to the other world. A group of dwarfs have played a part in the story and they have been thrust through the doorway but to them it is dim and dark and stinky. Aslan comes and, at the request of one of the children, tries to help the dwarfs see the light, but to no avail. They cling to their dark reality and so cannot see or hear him. He even spreads out a huge feast for them to eat, but they perceive only bad food, and then start arguing over who is getting what. Aslan says to the children, “You see. They will not let us help them. They have chosen cunning instead of belief. Their prison is only in their own minds, yet they are in that prison; and so afraid of being taken in that they cannot be taken out.” Lesson #2: we may not choose hell, but if we cling to our own perspective of reality, we may have a long purgatory before awakening. 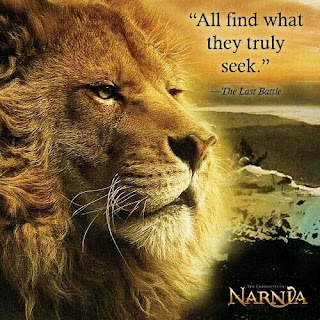 And then there is Emeth, one of the warriors for the Calormen, who served Tash quite nobly, but the name of Aslan was hateful to him. When he went through the “door” and met Aslan, he immediately recognized him as Lord and thought he must die for having served Tash all his life. He later relates the story this way: “The Glorious One bent down his golden head and touched my forehead with his tongue and said, ‘Son, thou art welcome.’ But I said, ‘Alas, Lord, I am no son of thine but the servant of Tash.’ He answered, ‘Child, all the service thou hast done to Tash, I account as service done to me.” Furthermore, “If any man swear by Tash and keep his oath for the oath’s sake, it is by me that he has truly sworn, though he know it not, and it is I who reward him. And if any man do a cruelty in my name, then, though he says the name Aslan, it is Tash whom he serves and by Tash his deed is accepted.”

Lesson #3: we may be mistaken in our beliefs, but our intention and our actions, and the virtue with which they are done, indicate who re really serve. Good and evil are opposites; they are not the same. Jesus says, “By your fruits you will know them.” This noble warrior longed for the truth with all his heart and, mistaken though he was, in the end he was rewarded with his true desire and nothing in his life was for naught. Very consoling I would say.