“What Makes the Catholic Mind Unique?” is the title of an article by Fr. David Meconi, SJ, in the December 2020 issue of New Oxford Review magazine, available online.

To summarize his presentation, we might start with creation: space, time, matter. “God’s world,” Fr. Meconi says, “by its very nature, is a sacramental that lifts human minds to their Creator through the divine embeddedness of matter. For the truly Catholic mind, this world is awash with grace.”

“Embeddedness” here is something like St. Paul’s expression that God’s “eternal power and deity has been clearly perceived in the things that have been made” (Ro 1:20). And yet it goes further. It means God’s incarnation. Not absorption – we are not God, the universe is not God.

Incarnation means the Second Person of the Divine Trinity assumed human flesh in Jesus Christ, which flesh has the particularities of matter, time, and space. “He is a God who has become visible thanks to the ‘yes’ of a young Virgin who gave Him particularity. That is, in her ‘yes,’ Mary allowed God to be not just everywhere” – in a spiritual sense – “but somewhere specific. God Himself is now kicking in this womb, now asleep in this cradle, now teaching on this mountain, now dead on that cross.”

Moreover, “The Catholic vision,” Fr. Meconi says, “allows that Incarnation to continue. The divine is still conveyed materially.” How is that? By the Last Supper “Knowing He would soon ascend back to the Father, our Lord translated Himself into the Most Holy Eucharist: ‘This is now my Body, this is now my Blood.’ As such, Christ’s real presence in the Eucharist is how the God-made-flesh keeps His promise never to leave us orphans (cf. Jn. 14:18). It is how the God-made-flesh can be with us always even until the end of the age (cf. Mt. 28:20).”  There is no other way to touch, to see, to even taste the divine in this world than in the Most Holy Sacrament. 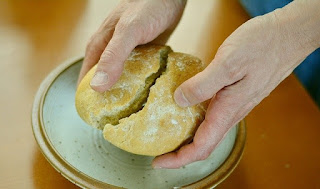 St. John emphasizes the tactile particularity of “that which we have heard, which we have seen with our eyes, which we have looked upon, and touched with our hands” (1 Jn 1:1-2). He could have easily expressed these same words regarding Jesus in the Holy Eucharist for it is John who tells us that the way to abide in Christ is to eat Christ’s flesh and drink His blood (Jn 6:56).

God in Christ has united heaven and earth (cf. Eph 1:10; Col 1:20). Thus Fr. Meconi says, “this inbreaking of God into the human condition ... continues today” in His Church. “The Church is not a human invention; she is to be understood as a living body indistinguishable from Jesus Christ Himself. In fact, the Church is nothing other than the extension of Christ in every age and place until the end of time.” That is why in the Creed we say, “I believe in God, the Father almighty .... I believe in One Lord, Jesus Christ .... I believe in the Holy Spirit .... I believe in one, holy catholic, and apostolic Church ....” Yes, the word “catholic” means universal, but “the true Church is known by antiquity, universality, apostolic succession, and the miraculous nature of her very existence.”

It is the Eucharist, then, which leads to the Catholic sacramental worldview. The world, matter, the body – all are good. God chose to assume flesh just like ours, and He also chose to form a visible, physical body in His Church (Mt 16:18).

In summary, Fr. Meconi writes: “The Catholic mind is unique; it is neither more faithful nor holier than other Christian minds. Yet it is graced to see God and His good creation differently. For the Catholic world is a sacramental that enters the material order as the divinely invented arena dripping with grace. Creatures are diaphanous windows, faint reflections, of a Triune Love that longs to be known in and through its first gift outward. That is why Catholic eyes are filled with crucifixes and statutes, our nostrils filled with incense, and our knees on the ground, or our feet in Eucharistic procession. Such bodily devotions matter because the pilgrim soul is inextricably bound up with the body. Further, such devotions matter because we trust that the Church that models such things is the Church that Christ not only founded 2,000 years ago but directs at this very moment.”

Dibby Green
Originally published in the print edition of the Mojave Desert News  dated January 21, 2021.
Our Lady of Lourdes Catholic Church is located in California City, CA. Visit our website at ollcalcity.org.