Next Wednesday, February 17th, is Ash Wednesday, which begins the season of Lent.

“By the solemn forty days of Lent the Church unites herself each year to the mystery of Jesus in the desert” (Catechism of the Catholic Church, 540) – to his fasting, prayer and overcoming the devil’s temptations.

There is evidence back to the Second Century that since the time of the Apostles some form of Lenten observance was followed by the Church in different forms in different locations, always including prayer, fasting, and almsgiving. The observance probably had become standardized by the Fourth Century because the Council of Nicea in 325 refers to “the 40 days of Lent,” indicating it was universal by then.

Pope St. Gregory the Great (c. 540-640 AD) is credited with giving us the Ash Wednesday ceremony where the priest or other minister (typically, but not this year) marks the penitent’s forehead with ashes to remind us of the Biblical symbol of repentance (sackcloth and ashes) and mortality (“You are dust, and to dust you will return” Gen. 3:19). But this year, because of the continuing Covid-19 epidemic, and in order to avoid physical contact, the more ancient form of sprinkling ashes on top of the penitent’s head will be done instead of touching the forehead with the sign of the cross. 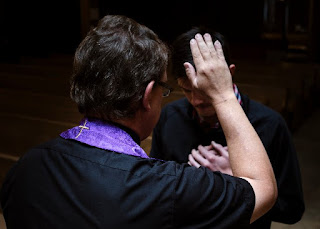 During Lent, Christians are to fast, pray, and give alms (acts of charity) “which express conversion in relation to oneself, to God, and to others” (Catechism, 1434). The Church requires Catholics to fast (ages 18 through 59) and abstain from meat (age 14 and older) on Ash Wednesday (February 17) and Holy Friday (April 2), and to abstain from meat (age 14 and older) on all Fridays of Lent. This is minimal. Anyone desiring to put God first will do more, and so many other customs and practices have developed such as giving up something extra during Lent (one or more small sacrifices for the Lord), making the Stations of the Cross (a devotional remembrance of Christ carrying his cross and his crucifixion) (if we are not allowed back inside the church, you can still make them at home), attending weekday Mass, taking extra time for personal prayer and spiritual reading or devotional reading the Bible, and especially for making a good confession.