Barnabas 3. Disciple of Gamaliel with Saul?

It is important for us as Christians to learn from our Christian and Jewish ancestors in the faith, so we are exploring the life of St. Barnabas mentioned in the New Testament. We’ve seen the likely possibilities that St. Barnabas (Joseph) and St. Paul (Saul) were born around the same time (about 5 AD) and were trained together as disciples under Rabban Gamaliel the Elder in Jerusalem. What might their companionship have been like? 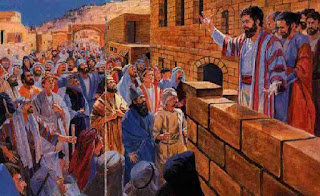 In his novel titled, The Apostle [1], the Jewish Polish American novelist Sholem Asch (1880-1957) imagines both Joseph and Saul as hearing some of St. Peter’s preaching during the Pentecost festival, seven weeks after Jesus’ crucifixion.

These Galileans, Asch writes, typically wear “a robe of sackcloth [with] bony, protruding arms and legs, high heads thickly covered with black curls, tangled beards, flashing eyes” and speak with “wild and eager gestures, as if they were feeling the story with their fingers while they told it with their lips.”

The principal speaker (St. Peter, per Ac2:14) “told them an incredible thing: that Yeshua [Jesus], whom Pontius Pilate had crucified on the Passover before this Pentecost, was none other than the promised Messiah; that he, the crucified one, had risen from death and had revealed himself to his followers and disciples on the Mount of Olives, where they had hidden themselves after his death that they might not be swallowed by the storm.”

“‘So early in the morning, and already so full of sweet wine,’ said one man….

“‘Not only with sweet wine, but likewise with the poison of the Evil One,’ said another.”

As discussion about throwing the Galileans out of the Temple arose, Saul thrust himself forward and asserted: “‘No, it is not for their belief in the resurrection that these men should be driven from the Temple court. It is only you unhappy Sadduceans who deny the resurrection.... No! They should be thrust forth from this sacred place because they take a hanged man and exalt him as the holy person of the Messiah, whereas it is written in the sacred script: “The curse of God rests on him that has been hanged.”’”

Saul was going on but felt a plucking at his elbow. Joseph. He was sedate and quiet.

“‘Saul!’ he said, gently. ‘We shall be late for the morning dissertation of Rabban Gamaliel.’

“‘Right, Joseph! You are right!’ answered Saul, convulsively. ‘The babblings of these Galileans will rob us even of our Rabbi’s discourse.’ And as abruptly as he had thrust his way forward, he now turned and thrust his way out of the throng.”

As they rapidly walk along together, Saul exclaims, “‘A Messiah who has been crucified, who was buried, and who has risen from the dead! ... Where have they learned such things if not from the heathen?” He went on about Canaanite and Babylonian beliefs, exclaiming, “These are the abominations which they would plant in the garden of Israel. Tear them out by the roots, I say!’”

“‘But, Saul,’” Joseph interjects, “‘how can you compare those heathen beliefs with what the men of Galilee were preaching? They based themselves on our Prophets. They do not deny our God, neither do they turn from the Jewish way. On the contrary, they call men to repentance, and they prepare for the great day to come....’

“‘Joseph! ... The hope of Israel, the anointed Messiah, one that was hanged!’”

Saul, hot-tempered, authoritarian. Saul would have none of it.

Joseph, mild, reflective, musing on the prophecies of Isaiah: “‘He was led like a lamb to the slaughter.’ And, ‘for the sins of my people was he stricken, and he made his grave with the wicked.’” Joseph wondered. “‘He bore our sickness, and was smitten with our transgressions.’” [Is. 53.]