St. Barnabas 4. The African Memory of His Extended Family

This week we look at St. Barnabas’ background from a new perspective. 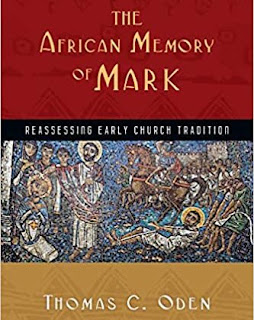 In Thomas C. Oden’s “The African Memory of Mark,” [1] Dr. Oden relates the African tradition as to Mark’s family. Recall from our first article on St. Barnabas that John Mark is Barnabas’ sister’s son (Col4:10), and we also mentioned that the Orthodox tradition has St. Aristobulus (Ro16:10) as Barnabas’ brother. The African Coptic tradition understands this “brother” to be what we call brother-in-law inasmuch as Barnabas’ sister, Mary (Ac 12:12), was married to Aristobulus, which makes John Mark the son of Mary and Aristobulus. [2]

Furthermore, the African tradition is that St. Peter’s wife was named Strapola, and she was a relative of Aristobulus.

Dr. Oden tells it this way, quoting Coptic scholar Girgis: “‘Peter was married to Strapola, a relative of Mark’s father’ [Aristobulus] and the family lived ‘together with Mark’s mother [Mary] and her brother Barnabas,’ which ‘might explain the close intimacy between Mark and Barnabas on the one hand, as well as between Mark and Peter, who called him “son,” on the other.’” [3] (In 1 Pet 5:13, Peter writes, “my son Mark.”)

Very interesting! This extended family unit all lived together! How might that be?

It would not be Galilee where Peter fished before he met Christ (27 AD). It would be in Jerusalem where Mary’s house was (Ac 12:12, in 43 AD). Barnabas was there also if he was indeed sent to Jerusalem for study (perhaps at 15 or 16 years of age [4], c. 20-21 AD), while serving in the Temple as a Levite (Ac 4:36), and where we know he was located following Saul/Paul’s conversion (Ac 9:27, c. 35 AD; 11:22, c. 41 AD). So it may well have been that Peter and his wife stayed with Mary, Aristobulus, John Mark, and Barnabas when they came to Jerusalem for the different feasts each year, and later during Christ’s ministry when Peter would be in town. It is believed that Mary’s house was the same house called the “upper room” or “cenacle” where the disciples were staying before Pentecost (Ac 1:13, 30 AD) and devoting themselves to prayer (Ac 1:14), and we know Peter was staying there as well (Ac1:15). Thus when the angel rescues Peter from prison, he would naturally go home (Ac 12:12, 43 AD).

So the African tradition correlates with the Biblical witness.

But, really, would people from Cyprus (Barnabas, Mary, Aristobulus originally), Cyrene (in modern Libya; Mark, so likely Aristobulus and Mary later), and Galilee (Peter, Strapola) really live together in Jerusalem in the First Century? The answer is yes.

All are Jews. Though some were from the Diaspora (Cyprus, Cyrene) and thus somewhat Hellenist, in general there was no general tendency of the Jews to assimilate; the religious sentiment of Judaism and the practice of the Jewish law dominated and they regarded themselves essentially as Hebrews living abroad. [5] There was no weakening of ties with the land of Israel and with the people living there, particularly in Jerusalem with its Temple. [6] Different communities of the Diaspora even had their own synagogues in Jerusalem (Ac 6:9), which also served as community centers and hostels (cf., Ac 2:5). [7] Temple authorities maintained contact throughout the Diaspora (e.g., 2Macc 1:10, 18), and news and fellowship was also shared at the customary Sabbath common meals held both in the Diaspora and in the Holy Land. [8] So yes, indeed, Jewish kinship ties would certainly be maintained in the First Century.

Thus God brought together quite a group in Jerusalem at the time of Christ. What might this mean for Barnabas’ future mission? For all the Church?

What does it imply for me today? Like Barnabas, God created each of us with wonderful forethought for our individual lives, and every bit of our past and present – including our exercise of free will – can serve our mission to abide in Jesus, to love as Jesus does, and bring His light into this world.