During the Easter Season our first Biblical reading at Mass is from the Acts of the Apostles about the beginnings of the early Church. Now in the Acts we are introduced to St. Barnabas, a wonderful saint for us to get to know.

The online 1907 Catholic Encyclopedia says the Church ranks St. Barnabas as an Apostle with the Twelve, like St. Paul [1]. Did you know that? We can see from the book of Acts why this is the case, although it takes a sharp eye.

In telling the early Church’s story, St. Luke (the author of the book of Acts) initially gives priority to St. Barnabas over that of St. Paul, then still called “Saul” by Luke. In fact, Barnabas is initially emphasized and placed first with only later reference to Saul (Ac11:22, 25, 30; 12:25; 13:1-2, 7). But then St. Luke’s priority changes. During Barnabas’ and Paul’s missionary journey together (Paul’s first), a miracle performed by Saul through the Holy Spirit in front of the Gentile Roman procounsel on the island of Cypress causing a sorcerer to become blind, resulted in the procounsel’s conversion at the wonder (Ac 13:9-12). It is from this point that St. Luke drops the name “Saul” and refers to him as “Paul” (Ac13:9), and Paul becomes the lead character for the remainder of Acts (e.g., 13:13), starting right then in the telling of that first missionary journey where Paul now becomes the principal speaker (e.g., 13:16; 14:12), even though Barnabas also continued evangelizing and speaking (e.g., 13:43, 46; 14:3, 7), and both performed signs and wonders (Ac 14:3) and received persecutions (13:50; 14:5). Barnabas is also named elsewhere in the New Testament. So it is the memory of the Church that St. Barnabas is an Apostle along with St. Paul and the Twelve.

But let’s go back to start Barnabas’ story from the beginning. 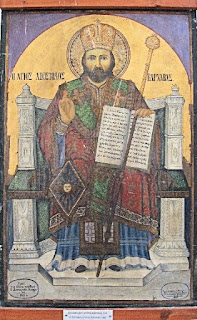 Even though the Apostles called him “Barnabas,” they knew that Barnabas was actually named “Joseph” at birth, that he was of the tribe of Levi, and born on the Mediterranean island of Cyprus (yes, the same location where St. Paul worked the miracle converting the Roman procounsel) (Ac 4:36). As Barnabas later was a landowner (Ac 4:36), as was his sister Mary (Ac 12:12), the tradition is that he was born into a wealthy family. [2]

Although there is no historical record nor known tradition, the story is that Barnabas once said, “They named me Joseph because like the ancient one,” – i.e., Joseph, the first son of Rachel and 11th son of the Patriarch Jacob – “I relieved my mother of the grief of being barren. But my mother always said, ‘my consolation’ when she fed me, so I became Barnabas for everybody.” “Barnabas” means “son of consolation” or “encouragement” (Ac 4:36). So as the firstborn after a long wait, and being “the consolation of his parents,” the story is that he was consecrated to God from his birth. [3] And per this story, it would be reasonable to think that Barnabas might have been born around 5 AD. (This “story” is as relayed in a 1946 mystical vision of Maria Voltorta. [4])

Barnabas also had at least two younger siblings. The tradition of the Eastern Church is that the Aristobulus whose family St. Paul greets in his letter to the Romans (Ro 16:10) was the brother of Barnabas. Barnabas also had a sister Mary, the mother of John Mark (Ac12:12). John Mark is called Barnabas’ “cousin” by St. Paul in English translation (Col 4:10), but the Greek term specifically means a sister’s son. So today we would say Mark was Barnabas’ nephew, meaning Mark’s mother was Barnabas’ sister. We will hear more of both Aristobulus and Mark as our story of Barnabas unfolds in future installments.

But for now, consider that the person of St. Barnabas is an ideal for all of us to ascribe to as he is described as being “full of the Holy Spirit and of faith” (Ac 11:24).

Dibby Allan Green
References
[1] “St. Barnabas,” Catholic Encyclopedia, https://www.newadvent.org/cathen/02300a.htm, Accessed Apr 29, 2021.
[2] https://orthodoxwiki.org/Apostle_Barnabas - accessed Apr 29, 2021. Witherington, Ben, III, The Acts of the Apostles, A Socio-Rhetorical Commentary (Grand Rapids, MI: William B. Eerdmans Publishing Company, 1998), p. 211: “One may also rightly point to Mary, the mother of John Mark, as a person of higher status who had a large enough home to allow various early Christians to meet in her above, and at least one domestic servant but probably more (Ac 12:12-13),” and p. 212, regarding Barnabas selling his land (Ac 4:36): “... this presupposes that various of them had something they could share, some goods they could part with in order to make sure others had at least food, shelter, and clothing,” and also p. 212, considering Barnabas’ title as a Levite (Ac 4:36): “which may suggest a person of some social status.” See Josephus, Antiquities of the Jews 13:285 regarding the prosperity of the Jews of Cyprus.
[3] Cf., “The tribe of Levi was dedicated to the Lord,” Johnson, Luke Timothy, The Acts of the Apostles in Harrington, S.J., Danile J., Ed., Sacra Pagina, Vol. 5 (Collegeville, MN: The Liturgical Press, 1992), p. 87.
[4] Voltorta, Maria, Poem of the Man-God (Isola del Liri, Italy: Tipografia Editrice M. Pisani sas., 1992, reprint of 1989 by Centro Editoriale Valtortiano srl.), Book 4, §469, p. 367.
Originally published in the print edition of the Mojave Desert News  dated May 6, 2021, modified.