Last week we began a series on St. Barnabas. He was “a Levite” (Ac 4:36), a title which includes being born of the tribe of Levi, but more specifically designating that he was of the lowest order of Levitical priesthood. The Levites were those who cared for the service of the Temple sanctuary but did not function as priests at the altar. [1]

The 1946 mystical vision of Maria Voltorta (referenced in last week’s article) also says that as a child, Barnabas’ parents, grateful to the Lord for having him, entrusted him to relatives in Jerusalem so that he might be of service at the Temple. [2] This is plausible if Barnabas’ sister Mary’s house in Jerusalem (Ac12:12; Col 4:10) was family property during Barnabas’ childhood. Valtorta’s same vision says that while serving in the Temple, Barnabas met Rabbi Gamaliel and became “his diligent and loved disciple.”

Both ideas are consistent with Barnabas being a Levite, as well as with the tradition of the Eastern Church: Barnabas “received his education at Jerusalem, being raised with his friend and fellow student Saul (the future Apostle Paul) under the renowned teacher of the Law, Gamaliel. Joseph [Barnabas] was pious, he frequented the Temple, he strictly observed the fasts and avoided youthful distractions.” [3]

Given the close relationship of Barnabas and Paul we find in the Bible–so close that they could sharply dispute (Ac 15:39) but still remain friends (1 Cor 9:6; Col4:10)–and their relatively similar ages (both can be estimated to be born about 5 AD as each are described as a “young man” around AD 30-32 [4]), this Eastern tradition is also plausible (although there might be a bit of pious legend added at the end). 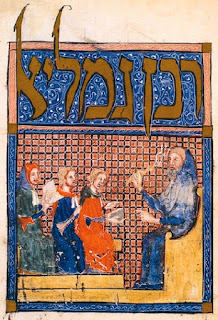 Who was Gamaliel? He is mentioned twice in the Bible. In Acts 5:34 he is described as a Pharisee and member of the Sanhedrin Council. Then Paul refers to “sitting at the feet” of Gamaliel (meaning being his disciple) in Acts 22:3. In Jewish history he is called “Gamaliel the Elder,” or “Rabban Gamaliel I.” “Rabban” (“Our Master”) was a title used to distinguish the office of the Nasi (Prince) from that of the other rabbis. The Talmud refers to Gamaliel as the third of a five-generation dynasty of Nasi, the first of which was the great Rabban Hillel the Elder (Gamaliel’s grandfather), founder of the “School of Hillel,” which includes Gamaliel’s teaching as well. Gamaliel is sometimes considered among the greatest Hebrew scholars of all time. His recognition is so great that the Mishna states, “Since Gamaliel the Elder died, reverence for the law has ceased and purity and moderation are vanished.” There is a Christian (but not Jewish) tradition that sometime after Christ’s resurrection, Gamaliel became a believer in Jesus Christ.

So what would it have been like for Barnabas growing up? Perhaps something like how Paul describes his own experience. “Circumcised on the eighth day, of the people of Israel, of the tribe of Benjamin [Barnabas was of the tribe of Levi], a Hebrew born of Hebrews; as to the law a Pharisee [certainly also for Barnabas inasmuch as Gamaliel was a Pharisee] ..., as to righteousness under the law blameless” (Phil 3:5). “I am a Jew, born at Tarsus in Cilicia [Barnabas was a Jew born at Salamis, on Cyprus [5]; so both were Hellenized Jews], but brought up in this city [Jerusalem] at the feet of Gamaliel, educated according to the strict manner of the law of our fathers, being zealous for God” (Ac 22:3). “My manner of life from my youth, spent from the beginning among my own nation and at Jerusalem, is known by all the Jews. They have known for a long time … that according to the strictest party of our religion I have lived as a Pharisee.” (Ac 26:4-5.) “I advanced in Judaism beyond many of my own age among my people, so extremely zealous was I for the traditions of my fathers” (Gal 1:14).