In our continuing series examining the life of St. Barnabas, we now come to the first specific Scriptural references to him in Acts 4:36. Chronologically, Jesus had been resurrected, had ascended into Heaven, and the Holy Spirit had come at Pentecost. It’s 30 AD. The Apostles Peter and John had, in the name of Jesus, healed a lame beggar at the Temple, Peter had preached, both had been arrested, testified before the Sanhedrin Council, and been released. The Church was now counted at 5,000 men. Peter and John’s meeting strong opposition only served to strengthen the entire Church, and they prayed for greater boldness in preaching and greater healings, signs, and miracles. It was such a fervent prayer that they were all, once again, “filled with the Holy Spirit and spoke the word of God with boldness” (Ac 4:23-31). We can assume Barnabas was in that powerful prayer meeting or Liturgy, presumably also at his sister Mary’s house.

Luke then writes in the Acts of the Apostles of a rather idyllic Pentecost afterglow in the Church by their community life of charity. “Now the company of those who believed were of one heart and soul, and no one said that any of the things which he possessed was his own, but they had everything in common.... There was not any one needy among them, for as many as were possessors of lands or houses sold them and brought the proceeds of what was sold and laid it at the apostles’ feet; and distribution was made to each as any had need.” (Ac4:32-35.)

This was no mandatory collectivism, but free-will generosity which some of the Christians chose to do (cf., Ac 5:4) out of the charity, the love, of the Holy Spirit upon them. Luke uses here Hellenistic (Greek) expressions to describe the Church’s community spirit. Having “everything in common” is an expression for sharing among friends, and friendship was also commonly expressed as being of “one soul.” A further Hellenistic way of describing friendship was to say that no one said that any of the things which he possessed was his own. The Latino expression, “mi casa es tu casa,” “my house is your house,” has a similar connotation of friendship and welcome. [1] Jesus had said, “By this all men will know that you are my disciples, if you have love for one another” (Jn13:35). The Holy Spirit was now guiding the Church as a community in developing this love, and we will see that Barnabas is highlighted as the example.

We also see in Luke’s account the authority of the Twelve Apostles in the expression, “laid at the apostles’ feet,” used three times in five verses (Ac4:35, 37; 5:2). Whoever administers a group’s money influences the endeavors in which the group engages. So it implies trusting the Apostles’ discernment in distributing the funds where most needed. [2] St. Paul uses a similar expression of “sitting at the feet” of Gamaliel (Ac 22:3), which denotes Paul as the disciple and Rabban Gamaliel as the authority. Further on we will also see Peter’s leadership in discernment and judgment in countering Satan’s infiltration of the Church (Ac 5:3-4, 8-9). 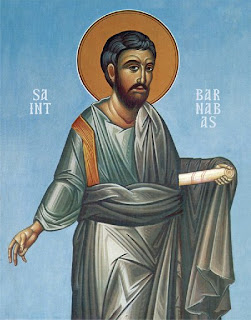 Luke tells it this way:  “Thus Joseph who was surnamed by the apostles Barnabas (which means, son of encouragement) ... sold a field which belonged to him, and brought the money and laid it at the apostles’ feet.” (Ac 4:36-37.) Next, Annanias and Sapphira, husband and wife, believers who had no obligation to contribute their entire sale proceeds, lied to the Church and to the Holy Spirit by saying theirs was the entire sale proceeds when it was not. Each individually lied, and upon Peter proclaiming each one’s deceit, each was struck dead. “And great fear came upon the whole Church, and upon all who heard of these things” (Ac 5:1-11). Yes, indeed!

Barnabas stands out as the example of virtue – of Christian charity, generosity, truthfulness, and humility before the Twelve. In contrast, Satan’s infiltration into the community stands out in the lying deceit of Annanias and Sapphira, and their judgment is horrifyingly immediate.

So we see that Barnabas, “son of encouragement,” is introduced in the Scriptures first for his example of charity. As one historian put it, Barnabas was one “whose generosity seems to have been infectious, [whose example] is quoted in terms of admiration.” [3]