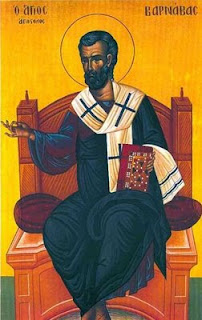 Last week we talked about St. Barnabas being introduced in the Acts of the Apostles as an example of charity. A couple of years will have passed before Barnabas is again named in Acts, but we can surmise what he might have been doing from the story of the early Church told in Acts.

In the chronology of Acts, the Apostles performed many healing miracles, suffered an arrest but also enjoyed a miraculous release, were re-arrested, testified before the Sanhedrin Council, again released at the urging of Rabban Gamaliel, and continued preaching undaunted (Ac 5:12-42). The first Deacons were appointed, and eventually St. Stephen the Deacon was martyred (Ac 6-7), and thereafter “a great persecution arose against the Church in Jerusalem,” instigated by Saul (Ac 8:1, 3).

As both Barnabas and Stephen are traditionally considered among the 70 (Lk 10:1-20), they surely would have known each other, perhaps as friends. Was Barnabas one of the “devout men” who buried Stephen and lamented over him (Ac 8:2)? Quite possibly.

Now we have already seen that Barnabas and Saul very likely had a long friendship together as disciples under Rabban Gamaliel. In his wonderful novel on the life of St. Paul, “The Apostle,” [1] Jewish Polish American novelist Shaloem Asch imagines Saul’s zeal being a zeal for the Torah and the yet-to-come Messiah (not Jesus!) – even to the extent of seeing himself as a new Pineas, the hero of the Hebrews who ended a plague by his righteous deed (Num 25:1-13; Ps 106:28-31). But Asch’s psychological profile of Saul is more complex. Saul is also acting, even if subconsciously, out of deep wounds from the betrayal of his friend Barnabas, “stolen” by the Apostles, a betrayer of Judaism.

Imagine these two former tightly-knit friends – one hot-headed the other more reflective – now separated from each other’s presence but never from their thoughts. Would Barnabas be aware of Saul’s actions? Surely. Would he be praying for Saul? Surely; Saul has yet to come to know Christ, and is now both a murderer and a persecutor of the followers of Christ.

Yes, a murderer. Acts tells us that while Stephen was still speaking in his defense at his trial before the Sanhedrin Council (Ac 7:2-53), those who had conspired to bring him before the Council (Ac 6:9-14) grew so enraged that they dragged him out of the city and stoned him to death (Ac 7:54-60) – killing Stephen prior to the Council being able to make a judgment. So it was not the execution of a sentence under the Law but rather a murder, and Saul had participated (Ac 7:58, 8:1).

In Asch’s novel, Saul is now called a murderer by others, shunned by his companions, and dismissed by Gamaliel as a disciple. He is rejected and isolated – but stubbornly defensive in his self-justification of the rightness of his actions. So he becomes an enraged persecutor of the Church under the glad authorization of certain Council members.

Saul’s persecution leads the Church to disperse from Jerusalem to the Mediterranean coast. They evangelize all along the coast preaching, healing, and even raising the dead (Ac 8, 9). The Holy Spirit leads Peter to even evangelize to the Gentile Roman Centurian, Cornelius (Ac 10:1-48; 11:1-18). Luke says some went as far north as Phoenicia (modern Lebanon), Cyprus (where Barnabas was from, Ac 4:36), and to Antioch in Syria (Ac 11:19). All these events are probably from 32 to 34 AD.

What would Barnabas – the disciple of Jesus Christ, the apostle who was “sent,” the example of generous charity (Ac 4:36) – be doing? Surely evangelizing along with the rest. A brief time later the Apostles will send him to lead the Church at Antioch (Ac 11:22), so unquestionably he will be doing successful evangelization work during these years, revealing Barnabas to be “a good man, full of the Holy Spirit and of faith” (Ac 11:24). Possibly Barnabas went back to his home town on Cyprus. Mnason of Cyprus, “an early disciple” (Ac 21:16), was likely converted at this “early” time. Was his conversion through the testimony of his fellow compatriot, Barnabas? Perhaps so.