During the early evangelization of the Church from around 32 to 34 AD which reached as far north as Antioch of Syria, another highly significant event occurred: the conversion of Saul, later known as St. Paul.

It was probably towards the end of 32 AD that the risen and glorified Christ Jesus appeared to Saul on the road to Damascus, Syria. Jesus identified Himself with His Church as His Body when He said, “Saul, Saul, why do you persecute Me?” (Ac 9:4.) Saul, for his part, was “still breathing threats and murder against the disciples of the Lord” (Ac 9:1), but Jesus said, “Why do you persecute Me?” and, “I am Jesus, whom you are persecuting” (Ac 9:4, 5).

Now Saul tells the story of his conversion many times in the Bible (Ac 22:6-16; 26:12-18; Gal 1; Phil 3:3-11). Damascus of Syria is east of Tyre and Sidon, and a great distance south of Antioch. Saul remains in Damascus (Ac 9:19b-22; 26:19-20) for a while, then spends some time in Arabia (which likely was the Nabatean region of Syria east of Damascus, but could have been around Mt. Sinai in what is today Saudi Arabia), and then returns to Damascus (Gal 1:17). He continues to proclaim that Jesus is the Son of God (Ac 9:20) and over time he “increased all the more in strength, and confounded the Jews who lived in Damascus by proving that Jesus was the Christ” (Ac 9:22).

At this point, both St. Peter and St. Barnabas are back in Jerusalem from Antioch, so that is where Saul goes. It was Saul’s first visit to Jerusalem since his conversion, but not surprisingly, everyone was afraid of him and would not believe that he was now a disciple (Ac 9:26).

St. Barnabas now plays a key role. Recall their friendship since they were both youths and disciples of Rabban Gamaliel. Recall the African tradition that the families of Barnabas and Peter were related by marriage and living in the same household in Jerusalem. Barnabas, faithful friend, “Son of Consolation,” would hear the conversion story directly from his friend Saul – whether or not he had also heard it from others as well (perhaps when he was still in Antioch? perhaps in Damascus on his way back to Jerusalem?). Barnabas would evaluate the genuineness of Saul’s conversion, and then would personally vouch for Saul. “Barnabas took him, and brought him to the apostles, and declared to them how on the road he had seen the Lord, who spoke to him, and how at Damascus he had preached boldly in the name of Jesus” (Ac 9:27). 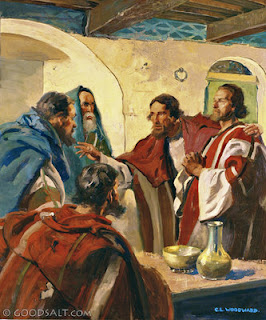 Reflect, too, on the integrity of Barnabas. At Barnabas’ word, his vouching for Saul, the whole Christian community in Jerusalem accepted that this one who was a murderer of Stephen, a murderous persecutor of Christians, was now a believer to be accepted, forgiven, and received into full fellowship. Barnabas paved the way for Saul’s forgiveness.

Saul says he stayed only 15 days with Peter, and met also with James the “brother” of the Lord, the Bishop of Jerusalem (Gal 1:19). He did some preaching in Jerusalem, especially among the Hellenists, who then wanted to kill him, so the disciples sent him back to his home town of Tarsus (Ac 9:28-30), which is northwest of Antioch, the Syria and Celicia areas (Gal 1:21) in today’s Turkey.

But, actually, Saul had a vision while praying in the Temple and it was the Lord who told him to leave (Ac 22:17-21). Later Saul would say he “was appointed a preacher and apostle and teacher” (2 Tim 1:11); was entrusted with the preaching task by the command of “God our Savior,” Christ Jesus (Tit 1:3). Perhaps, just perhaps, this call to apostleship came from this vision of the Lord Jesus in the Jerusalem Temple.