In our continuing series on the life of St. Barnabas, we last surmised that Barnabas would have been an excellent teacher to Gentile Christian converts of the virtues of charity and generosity for those suffering a famine in Judea (Ac 11:27-30).

St. John Chrysostom’s (344/354-407 AD) homily on this passage points out, “Do you see how for them the famine was an encouragement to salvation, an opportunity to give alms, and a harbinger of many blessings? ... The famine was foretold so that they might prepare themselves beforehand for almsgiving.” An interesting note on the purpose of prophecy: that people might prepare to respond to the call of the prophetic message with generosity. [1] 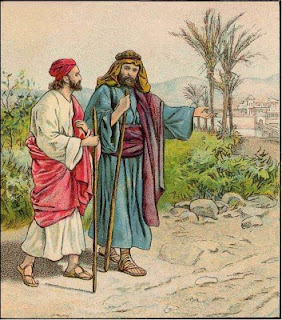 The Acts also tells us that the Church in Antioch sent their relief “to the elders [in Jerusalem] by the hand of Barnabas and Saul” (Ac 11:30). Notice that Barnabas continues to be named first as the leader. The term translated “elders” here is the word “presbyters,” the first time it is used in Scripture not in reference to Jewish leaders but now applicable to the leaders of the Church in Jerusalem. Later we will see Barnabas and Paul appointing presbyters in the various churches which they would form (e.g., Ac 14:23).

In his letter to the Galatians, St. Paul speaks of a time he and Barnabas, and “taking Titus along with me,” went to Jerusalem (Gal 2:1-10). Biblical scholars debate whether this passage applies to this “famine visit” (Ac 11:29-30) or to the later “Council of Jerusalem” (Ac 15:1-29). The better argument and chronology seems to fit this “famine visit.” Estimated dates range from 43 to 48 AD.

In Galatians, Paul says, “I went up by revelation,” which likely is a reference to the prophecy of the coming famine given by St. Agabus (Ac 11:28). Now Acts tells us the purpose was bringing the relief donations, and St. Paul reports that Peter, James, and John, the “pillars” of the Jerusalem Church (Gal 2:9), would “have us remember the poor, which very thing I was eager to do” (Gal 2:10), quite consistent with their relief mission.

However, Saul also had something else on his mind: “I laid before them ... the gospel which I preach among the Gentiles” (Gal 2:2) So what would be the issue? “But even Titus, who was with me, was not compelled to be circumcised, though he was a Greek” (Gal 2:3). So it was about circumcision, Jewish ritual practices. But Paul reports that these pillars required no additions such as circumcision to the gospel for the Gentiles. They recognized that he (and certainly Barnabas) had been “entrusted with the gospel to the uncircumcised, just as Peter had been entrusted with the gospel to the circumcised” (Gal 2:7). That is an interesting comment about Peter inasmuch as Acts makes it clear that Peter was the first to preach to the Gentiles at Cornelius’ house (Ac 10:1-11:18); however, it may have had more of a geographical reference – Antioch vs. Jerusalem. [2]

Canon Lucien Cerfaux has an insight here: “It was in Antioch that St. Paul came to realize clearly the urgent necessity of freeing from all Jewish practices those Christians who were converts from paganism. The Holy Spirit who was speaking in the Church of Antioch led Paul to a new phase of his apostolic life. Together with Barnabas, he became a ‘missionary of the church of Antioch' and worked to propagate a form of Christianity typified by this pagan-Christian church.” [3] Now the Canon is writing in retrospect where St. Paul is considered by far the dominant Apostle, but in fact at this time in Antioch, Barnabas is still the leader, but both preaching to Gentiles.

In any event, Saul sought affirmation from the Jerusalem Church elders, the “pillars.” Paul tells us that if he didn’t receive their affirmation, he would be “running or had run in vain” (Gal 2:2). Saul would not proceed to preach “his” gospel without the authoritative approval of the elder Apostles. But both Barnabas and Saul received the “right hand of fellowship, that we should go to the Gentiles and they to the circumcised” (Gal 2:9).