Continuing the story of St. Barnabas’ life, the next recorded event in the Bible is the first missionary journey of Barnabas, Saul, and Mark. But before we set on the journey with them we might reflect on Barnabas’ years in Antioch (probably three, but could be about five). 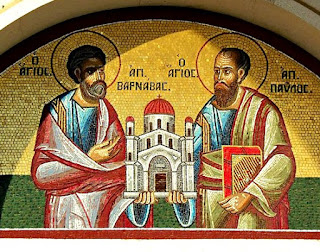 In past articles we’ve suggested that Barnabas was something of a mentor to Saul/St. Paul during their work together in Antioch. Historian Henri Daniel-Ropes writes, “[I]t was in Antioch that Saul concluded his studies in the art of apostleship, under the guidance of a truly wise and good teacher [Barnabas]. Antioch, we must remember, was the city in which the essential development in the Christian missionary outlook was even now taking shape.” [1]

This mentoring task may well have been through the influence of Barnabas’ goodness, gift of the Holy Spirit, and gift of faith (Ac 11:24) – in contrast to Saul’s more fiery temperament and pride. There also seems to have been a theological understanding which probably came about both from the mentoring and the practical missionary work. We can imagine many a conversation between Barnabas and Saul about Jewish practices and Gentile ways: what is necessary to be a follower of Christ? What would Rabban Gamaliel say? What did Jesus teach? And over time they discerned God’s will and, as we saw during the famine visit, presented their understanding to the Apostles in Jerusalem to verify (Gal 2:2-10). Historian Daniel-Ropes also writes, “So it is abundantly clear that in the community at Antioch the fundamental problems of the choice between Jewish particularism and Christian universalism had been solved.” [2] Jew and Gentile in Antioch even ate their meals together! (cf., Gal 2:11-13.)

Canon Lucien Cerfaux has similar observations: “There were times when Paul gained from the experience of others. Barnabas, perhaps to his own surprise, discovered before Paul did the possibilities of introducing Christianity to heathens who had not been prepared in the synagogue. Paul profited both from Barnabas’ acumen and from the audacity of the Hellenist Christians of Antioch who, after founding the pagan church of Antioch, continued to lead their lives as prophets and teachers in it. [Cf., Ac 13:1-3.] It was in Antioch that St. Paul came to realize clearly the urgent necessity of freeing from all Jewish practices those Christians who were converts from paganism.” [3]

Another interesting observation: William S. Kurz, SJ, notes what may be the Apostles’ different missionary approach to Jews and to Gentiles. He observed that when Peter is preaching to a Jewish audience, his approach is to convince them that Jesus, resurrected from the dead, is the Messiah (e.g., Ac 2:36), but when speaking to a Gentile audience, his approach focuses on Jesus as the one appointed by God as judge of the living and the dead and through whom forgiveness of sins may be received (e.g., Ac 10:42-43). We see this same approach to the Gentiles with St. Paul (e.g., in Ac 17:31). [4] So this may well have been the manner of evangelization to Jews and to Gentiles by the early Church, including Barnabas, who would have undoubtedly learned it from Peter, and by Saul/St. Paul.

As a final note, Glanville Downey, a historian on Antioch of Syria, points to the following contributions Antioch made to the development of the Church: (1) The acceptance of Gentiles without imposition of the entire Jewish law determined the ecumenical character of Christianity. (2) Antioch’s financial resources, not limited to the famine in Jerusalem, provided the finances for the early missionary journeys, something the Jerusalem Church could not have afforded. (3) Antioch’s central location with well-established communication network was a natural headquarters for expansion of the Church in all directions. [5]

And next week we will follow the Holy Spirit’s new call upon St. Barnabas.