The Holy Spirit’s new call upon St. Barnabas’ life unfolds like this: “Now in the Church at Antioch there were prophets and teachers, Barnabas, Symeon who was called Niger, Lucius of Cyrene, Manaen a member of the court of Herod the Tetrarch, and Saul” (Ac 13:1).

Notice, again, that St. Luke’s listing of prophets and teachers begin with Barnabas, presumably as lead.

Symeon, also called Niger (Latin for “black skin”), is mentioned next. Some think this is the same Simon of Cyrene (in Africa) who helped carry the Lord’s cross [1] (Lk23:26), although the spelling is different. But the Eastern Church tradition is that it is Symeon, son of Cleopas, younger brother of St. Joseph, one of the 70, second Bishop of Jerusalem from 67 to 107 AD, and who died a martyr. [2]

Lucius of Cyrene some believe to be St. Luke [3], again with different spelling, but tradition favors that this was St. Lucius of Cyrene, later Bishop of Cyrene in Ptolemais, Africa [4], who was appointed by St. Mark [5] , and was also one of the 70 [6].

Manaen who was a close friend of, or brought up with, or member of the court of – the Greek word is used many ways – Herod the Tetrarch. This is, Herod Antipas, the Tetrarch in Galilee (Lk 3:1) who put John the Baptist to death, was removed by Caligula in 39 AD, and exiled to Gaul, today’s France.

“And while they were worshiping the Lord and fasting, the Holy Spirit said,” – so this was during the worship of the Liturgy and likely after Holy Communion (as we mentioned about Agabus’ famine prophecy, per a First Century writing, the Didache, it was customary for the prophets to speak then) – “the Holy Spirit said, ‘Set apart for Me Barnabas and Saul for the work to which I have called them.’ Then after fasting and praying they laid their hands on them and sent them off.” (Ac 13:2-3).

The Church was already in prayer at the Liturgy and fasting, and after the prophetic word was given, they again fasted and prayed, and somehow they all discerned that the “work” was an evangelization mission. And we can be certain the Church’s fasting and prayer was joined with almsgiving in order to finance the mission. When God calls, He will always provide. 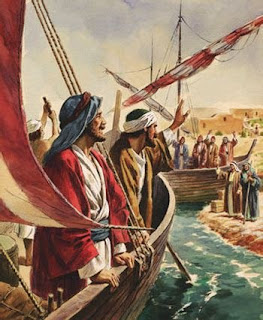 Acts says the Church at Antioch “laid their hands on them and sent them off” (Ac13:3) but, “being sent out by the Holy Spirit” (Ac 13:4) – so the Church laid hands but it was God, working through his Church, who called, ordained, and sent them out.

So Barnabas and Saul, with John Mark to assist them (Ac 13:5), set out (presumably on foot) from Antioch down (SW) the river valley from Antioch to Seleucia about 16 miles away, the Mediterranean seaport for Antioch. At Seleucia they catch a boat for the Island of Cyprus. Barnabas is once again going home to Cyprus. The year is probably 45 or 46 AD.

Dibby Allan Green
References
[1] https://dacb.org/stories/libya/lucius/, accessed July 18, 2021.
[2] https://orthodoxwiki.org/Apostle_Symeon, accessed July 18, 2021.
[3] https://thingspaulandluke.wordpress.com/2018/10/12/lucius-of-cyrene/, accessed July 18, 2021. “Lucius” is the same spelling as Ro 16:21, but differs from Col 4:14 where “Luke” is named. But there is an interesting hint which may suggest the idea. St. Luke is the author of Acts, in Acts 1:1 he speaks of himself in the first person (“I”), and in many other places he does the same (“we”), meaning he was present. Also, there are actually two separate editions of Acts which have come down to us, and both may well have been written as revisions by St. Luke. The “Old Latin” and “King James” version of the Bible use one version, but the other version is the one most of the earliest Church Fathers use. [Pelikan, Jaroslav, Acts, part of the Brazos Theological Commentary on the Bible, Reno, R.R., series Ed. (Grand Rapids, MI: Brazos Press, 2005), pp. 32-33. The first is represented in Codex Bezae Cantabrigiensis signified by “D,” and the second is typically called the “Western Text,” although Pelikan believes textus patribus receptus (TPR) is a much better designation.] So remember when prophets “came down from Jerusalem to Antioch” (Ac 11:27)? In this latter edition of the text, the next verse has an expanded introduction: “There was much rejoicing. When we were gathered together, one of those whose name was Agabus spoke, indicating ....” (Ac 11:28). [Johnson, Luke Timothy, The Acts of the Apostles, Sacra Pagina Series. Vol. 5, Harrington, Danile J., S.J., Ed. (Collegeville, MN: The Liturgical Press, 1992), p. 205.] The “we” here would indicate that Luke was present in Antioch, and thus not unreasonable to expect that perhaps he was this Lucius of Cyrene. However, there is no Church tradition that St. Luke was from Africa; some scholars believe he was born and lived in Antioch of Syria. [Hackett, Horatio Balch, A Commentary on the Original Text of the Acts of the Apostles (Gould and Lincoln; Sheldon, Blakeman & Co., 1858), p. 12, cited at https://en.wikipedia.org/wiki/Luke_the_Evangelist, fn., b., accessed Aug. 29, 2021.]
[4] https://www.catholic.org/saints/saint.php?saint_id=4337, accessed July 18, 2021.
[5] https://orthodoxwiki.org/Archdiocese_of_Cyrene, accessed July 18, 2021.
[6] https://orthodoxwiki.org/Seventy_Apostles, accessed July 18, 2021.
[7] St. John Chrysostom, Homilies on the Acts of the Apostles, 27 (PG 29:720-721) and 28 (NPNF 1 11:178), quoted in Martin, Francis, ed, Ancient Christian Commentary on Scripture, New Testament, Vol. V, Acts (Downers Grove, IL: InterVarsity Press, 2006), p. 159.
[8] St. Augustine of Hippo, Of the Work of Monks, 24.
Originally published in the print edition of the Mojave Desert News  dated September 2, 2021.