St. Barnabas, Saul, and Mark sailed from the Antiochian port city of Seleucia heading for the Mediterranean island of Cyprus, about 100 miles away. They land at Salamis along the eastern coast, initially preaching in the synagogues (Ac 13:5). Salamis was Barnabas’ birthplace and would, in the future, be the place of his martyrdom, [1] so undoubtedly he (and his nephew Mark) would have had relatives there.

Each Jewish synagogue in the diaspora (i.e., Gentile lands) had a hospice (overnight accommodation with kosher food) for traveling Jewish rabbis and messengers. We can imagine Barnabas, Saul, and Mark seeking the Salamis hospice out and staying there until Sabbath services when they might speak publically. Barnabas would likely also seek out family and old acquaintances to identify the baptized and share the Gospel with the unbaptized. On the Sabbath, then, perhaps Barnabas, as leader of the group, and on his “home turf,” would first give the message of Jesus of Nazareth being the Messiah, perhaps followed by words from Saul. Did these Cypriot Jews still think of Saul as the persecutor of the Church and Stephen’s killer?

In the coming days, maybe weeks, they would travel throughout the whole island of Cyprus (Ac 13:6), preaching in the synagogues, strengthening the faith of the baptized, and sharing the good news of the Messiah to the unbaptized, both Jew and Gentile, whoever would hear them.

Eventually they came to the town of Paphos along the southwestern coast of Cyprus. There they ran into a strange character: Elymas Bar Jesus, “Son of Joshua/Jesus.” Although a Jew, he was apostate, both practicing occult magic and being a false prophet (Ac 13:6-8).

But God whose providence is sometimes quite amazing used this apostate Jew to stir an interest in the Gospel in the Proconsul’s heart. Proconsul Paulus Sergius was “a man of intelligence” St. Luke says. That’s an interesting statement as to why the Proconsul should “summon” Barnabas and Saul seeking “to hear the word of God” (Ac 13:7). Did the Proconsul see through the shallow occult magic of Elymas? Was he already searching for something more? So summed they were, and Barnabas and Saul came to Paulus Sergius’s palace. Elymas was also present. 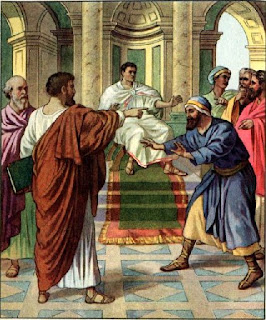 St. Luke doesn’t tell us what Barnabas and Saul may have shared about the Gospel to Paulus Sergius, Acts only says that Elymas “withstood them, seeking to turn away the proconsul from the faith” (Ac 13:8). Clearly some drama. Then Saul “filled with the Holy Spirit, looked intently at Elymas and ....” (Ac 13:9).

Wait a minute! Right then is when Luke says, “Saul, who is also called Paul.” Was that name change also the Holy Spirit’s inspiration? It is the first time in Acts that Saul is called “Paul.” So Luke wasn’t just saying Paul was another name for Saul; if that were the case, Luke would have mentioned it when Saul was introduced in Acts. No, Luke probably was saying Saul was “also” a Paul like Paulus Sergius – same word “Paulos” in the Greek for them both. Luke is telling us that Saul, the Hellenized Roman citizen from Tarsus, inspired by the Holy Spirit, now presents himself before the Proconsul using his Greek name, perhaps also showing his small bronze tablet inscribed with his name as proof of his Roman citizenship, and identifying with Paulus Sergius.

And when Paul speaks, now it is to Elymas but in the Proconsul’s hearing – and spoken under the Holy Spirit’s power:  “You son of the devil! You enemy of all righteousness! Full of all deceit and villainy!” The Lord will make you blind! And Elymas lost his sight immediately! (Ac 13:10-11.) No black magic; that is the Lord’s power and the Lord’s judgment!

Paulus Sergius saw it and was converted. He was “astonished at the teaching of the Lord!” (Ac 13:12) – “teaching,” here, obviously being the demonstration of God’s power.

And it also changed the relationship between Barnabas and Saul. Paul is now the leader.