The book of Acts tells us, “Some men came down from Judea and were teaching the brethren,” the Christians in Antioch, Jew and Gentile, “‘Unless you are circumcised according to the custom of Moses, you cannot be saved.’” Naturally Barnabas and Paul “had no small dissension and debate with them” (Ac 15:1-2). It was an issue they had faced many times before: Must Christian men submit to circumcision? Must all Christians submit to the Jewish ceremonial law and customs?

Now between 47 and 54 AD it seems likely that St. Peter was also actively ministering in Antioch [1], as well as in Jerusalem and perhaps elsewhere in his apostolic labors. At Antioch, all the Christians, Gentiles and Jews, ate together, not following Jewish dietary restrictions, and Peter joined in also without apparent scruple. So it seems it was around this time, probably late 48 AD, when these men from Judea had come, the ones who Paul says came from St. James Alphaeus (Bishop of Jerusalem). They were so persuasive that Peter actually withdrew from the common meal and ate separately out of fear or respect for “the circumcision party.” This affected the rest of the Jewish Christians who also withdrew. Even Barnabas started to follow them. (Gal 2:11-13) 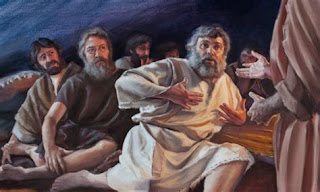 Precisely because Peter was the senior Apostle, and probably shocked that Barnabas was now even going along, Paul needed to address the situation in public. He rebuked Peter for not being “straightforward about the truth of the Gospel.” (Undoubtedly Paul’s words would burn in Barnabas’ ears.) “We, ourselves, ... know that a man is not justified by works of the law but through faith in Jesus Christ, and even we [Jews] have believed in Christ Jesus in order to be justified by faith in Christ and not by works of the law ....”  (Gal 2:11-16.) Furthermore, to abandon faith to return to the law would “nullify the grace of God,” “for if justification were through the law, then Christ died to no purpose.” (Gal 2:21.) Ouch, that was hard!

Fraternal correction can even be needed among Apostles when the truth of the Gospel is at stake. Paul’s personality could be harsh at times, but it enabled him to speak a correction, even publicly, when required. Peter, Barnabas, and the others slipped out of human respect by caring what the others thought of them, and so needed to work against their more easy-going personalities in order to stand up for the truth of the Gospel. Paul then speaks to all of us in our struggles to live in truth and be faithful to the Gospel: “I have been crucified with Christ; is it no longer I who live, but Christ who lives in me; and the life I now live in the flesh I live by faith in the Son of God who loved me an gave himself for me.” (Gal 2:20.) The truth of the Gospel isn’t about food and customs and culture. It is about surrender to Christ, allowing His life to live in us, as we live in Him.

It seems by early 49 AD these same “Judaizers” had also gone into Galatia and created the same kind of trouble in the various churches Barnabas and Paul had founded on their prior missionary trip. So Paul wrote his first letter, the Letter to the Galatians. It was from him “and all the brethren who are with me,” which would, of course, include Barnabas. At the end Paul says, “I bear on my body the marks of Jesus” (Gal 6:17). Was this a reference to still visible wounds from having been stoned at Lystra a year or two before?