Last week we learned about St. Paul being stoned by an angry mob at Lystra in Southern Galatia (modern Turkey). St. Luke tells us that Paul was able to get up, come into the city, “and on the next day he went on with Barnabas to Derbe” (Ac 14:20). The next day? The day after Paul’s attackers were certain he was dead? Now he’s walking the next day? Either divine intervention or powerful support by Barnabas. Probably both.

Derbe is a town about 60 miles to the southeast. Luke only tells us that Paul and Barnabas preached the Gospel in Derbe and made many disciples (Ac 14:21). In other words, they founded a local church there. 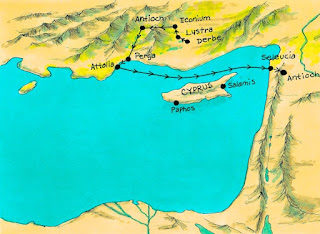 Then they returned the same way they had come: from Derbe to Lystra (where Paul was stoned); then to Iconium (where they fled a plot to stone both Barnabas and Paul; and Church tradition also tells us Paul was imprisoned and then banished from the city); and then back to the Roman colony of Antioch of Psidia (where both had also been run out of town). (Ac 14:21.) Why would they dare go back to the same places where they had been so persecuted? To strengthen the souls of the disciples and to encourage them “to continue in the Faith” (Ac 14:22). And so they strengthen the churches they had founded the previous year or two.

And with Paul’s and Barnabas’ litany of woes already filled, what were they preaching? “Through many tribulations we must enter the kingdom of God” (Ac 14:22). They didn’t mince words. Their bodies bore the sufferings. Each church they founded had witnessed the two Apostles’ sufferings, and the believers surely had their own.

Remember from last week’s article when Paul wrote to Timothy about Timothy having  “observed ... what befell me at Antioch, at Iconium, and at Lystra … what persecutions I endured” (2 Tim 3:10-11). Paul’s next words to Timothy were, “Indeed, all who desire to live a godly life in Christ Jesus will be persecuted” (2 Tim 3:12). To be a Christian is to battle through tribulations and sufferings. That’s normal. Jesus did the same. As did the prophets before Him.

Now when Barnabas and Paul were first in Lystra, Luke reminded his readers of their status as Apostles (Ac 14:14). Luke has told us of their preaching and missionary efforts, of forming local churches in each town, and of their sufferings and persecutions. Now Luke makes a general summary statement of the Apostles Barnabas and Paul first appointing elders (presbyters) “for them [the believers] in every church,” then “with prayer and fasting, they committed them [the presbyters] to the Lord” (Ac14:23). This is the record of the apostolic ordination of the first presbyters (later called bishops and priests) in Galatia. Paul and Barnabas did this “in every church.” Make no mistake. Christ founded His Church (Mt 16:18), and the Apostles founded local churches of the one Church wherever they preached the Gospel. This Church had an organization. The Apostles appointed, and committed to the Lord, presbyters, and did it for the people’s spiritual guidance.

From Antioch of Pisidia, Barnabas and Paul (and whoever else, including St. Thekla, journeyed with them) went back down the Taurus Mountain valleys to the southern coastal area called Pamphylia, shared the Gospel in a couple of the coastal towns, and then caught a ship back home to Antioch of Syria. “And when they arrived, they gathered the Church together and declared all that God had done with them and how he had opened a door of faith to the Gentiles. And they remained no little time with the disciples.” (Ac 14:27-28.)

The journey probably began about 45/46 AD and their return was about 47/48 AD, so about two years. They would continue to on in Antioch until the Spring of 50 AD, another two years, except from about April to June of 49 AD when they were in Jerusalem.