We saw last week that certain Jewish Christians had insisted that Gentile Christians had to follow the ceremonial laws of Judaism for salvation. St. Paul wrote his Letter to the Galatians – that is, to all the believers in the churches that he and St. Barnabas had formed on their recent missionary journey – to re-assert that salvation, “justification,” is solely based on faith in Jesus Christ. The letter was likely written early in 49 AD, perhaps not even a year after their return.

Paul’s passion expressed in this letter is brought out clearly in J. B. Phillip’s 1958 translation:

“O you dear idiots of Galatia, who saw Jesus Christ the Crucified so plainly, who has been casting a spell over you? I shall ask you one simple question: Did you receive the Spirit by trying to keep the Law or by believing the message of the Gospel? Surely you can’t be so idiotic as to think that a man begins his spiritual life in the Spirit and then completes it by reverting to outward observances? Has all your painful experience brought you nowhere? I simply cannot believe it of you! Does God, who gives you his Spirit and works miracles among you, do these things because you have obeyed the Law or because you have believed the Gospel? Ask yourselves that.” (Gal 3:1-5).

We chuckle at the translation, and admire Paul’s driving passion. We also recall all we learned about Barnabas’ and Paul’s journey – their preaching and conversions, their trials and persecutions, and their sufferings. Now we see there was more to the story: the believers themselves underwent their own “painful experiences,” no doubt from similar persecutions and sufferings. We also learn that they witnessed many miracles, likely at the hands of Paul and Barnabas, but just as likely from others as well, all through the Holy Spirit. The Spirit was so tangibly given to the believers that they know with a certainty that the Holy Spirit dwelt within and among them. So Paul is not only referring to salvation “from” sin, but also salvation “for” life in Christ by the Holy Spirit. (See the small book, “Salvation,” by Dr. Michael Patrick Barber, and easy and enlightening read.)

Paul also says those brethren in Galatia “saw Jesus Christ the Crucified so plainly.” Was he merely speaking in an analogy of the Gospel message of Christ’s passion and death? Or perhaps “saw” is more literal. Perhaps some vision, but probably more likely their visibly seeing the sufferings of Paul, Barnabas, other believers, each bearing visible wounds in their flesh for the sake of Christ. Paul also hints at something like this when he writes at the end of his letter, “I bear on my body the marks of Jesus” (Gal 6:17). Those first Christians would have actually seen whatever he was referring to. 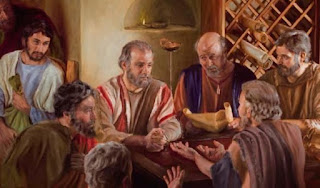 The next event in Barnabas’ life that we know of is that by about April that year (49 AD), he and Paul were in Jerusalem. Let’s do some reasonable speculation about how this might possibly have come about. The so-called  “Judaizers” had swayed Peter and had begun to sway Barnabas. Paul forcefully spoke up. The three had many discussions on the difficult question of Christian belief and Jewish Law, particularly ceremonial law. Then brethren came from the Galatian area informing them that the same issue was dividing the churches in Galatia. Peter, Barnabas, and Paul conferred and decided a letter would be best. Paul was the main author (Gal 1:1) but perhaps they all contributed some thoughts (Gal 1:2). At the same time they probably realized that this issue will undoubtedly be a problem in Judea and everywhere. Perhaps it was Peter who spoke up and said that all the Apostles needed to meet and decide how to deal with it. Imagine Peter saying, “The roads are clearing from the Winter storms. I’ll go down to Jerusalem now and send messages to all the Apostles to gather in the Spring. You both come in Spring. We will all fast and pray for the guidance of the Holy Spirit.”
Dibby Allan Green
Originally published in the print edition of the Mojave Desert News  dated November 4, 2021.