It is now April of 49 AD. St. Barnabas, St. Paul, and “some others were appointed” by the church at Antioch “to go up to Jerusalem to the Apostles and the Elders” about the question of whether Gentiles who became Christians had to keep the entire Jewish Law (Ac 15:2).

You may recall that Barnabas, Paul (then Saul), and Titus had also gone to Jerusalem a few years previous at the time of the famine in Judea. They had discussed their preaching the Gospel among the Gentiles with the Apostles Peter, James, and John, and had received the “right hand of fellowship” to continue evangelization of the Gentiles. (Ac 11:29-30; Gal 2:1-10.)

Precisely because their missionary work was bearing so much fruit, some Jewish Christian sensibilities were aroused to insist that Gentile converts had to keep the entire Jewish Law. We saw last week that Paul and Barnabas strongly countered that assertion (Ac 15:2).

So now Barnabas, Paul, and company were formally appointed and sent by the Church at Antioch to go to Jerusalem to meet with the Apostles and Elders. They traveled along the Mediterranean coast through Phoenicia and Samaria – both areas usually avoided by Jews. However, by now they were filled with Christian converts. (Ac 15:2-3.)

The case for the Jewish Christians was made by Christian Pharisees (Ac 15:5). After much debate, Scripture says, Peter rose (indicating his authority) and spoke of God bearing witness to the Gentiles “in the early days” [i.e., to Cornelius and his household] by giving them the Holy Spirit the same as He had given the Spirit to the Jews, making no distinction. “We believe that we [Jews] shall be saved through the grace of the Lord Jesus, just as they [Gentiles] will.” (Ac 15:7-11.) Sound familiar? “A man is not justified by works of the law but through faith in Jesus Christ, and even we [Jews] have believed in Christ Jesus in order to be justified by faith in Christ and not by works of the law ...." (Gal 2:16.) And, “Did you receive the Spirit by works of the law, or by hearing with faith?” (Gal 3:2.) (Was the Letter to the Galatians read to the Council? Was it the framework for all that Peter, Barnabas, and Paul said at the Council?) 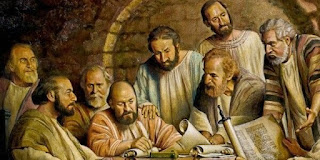 With that, Barnabas and Paul spoke of all the miraculous works the Holy Spirit had done among the Gentiles (Ac 15:12) – evidence of God’s “witness” (as Peter had said) to their faith.

The Apostle James the Less/of Alphaeus, Bishop of Jerusalem, affirmed Peter’s statement, quotes the OT Prophets in support, and suggests that the few prohibitions of the Law which had always applied both to Jews and Gentiles should still apply, but otherwise the Gentile converts should not be troubled by the Jewish Law (Ac 15:13-21).

What we see here is Peter making a statement of doctrine (which cannot change) and James making a statement of morals which do not change (unchastity) and discipline which may change over time (three dietary restrictions). These are agreed by the Apostles and Elders together. This is the teaching authority, the Magisterium, of the Church at work. As such, it was both a decision of the Holy Spirit and of them (Ac 15:28), just as Jesus had promised the Holy Spirit would teach them (Jn 14:26) and guide them into all the truth (Jn 16:13).

The Council then chooses two of their own (Judas Barsabbas and Silas) to accompany a letter from the Apostles back to the churches of Antioch, Syria, and Cilicia, saying that they are sending these two “with our beloved [“agape” as a plural adjective] Barnabas and Paul, men who have risked their lives for the sake of our Lord Jesus Christ.” (Ac 15:23-29.)