St. Barnabas. How the Jerusalem Council Decree Was Understood. 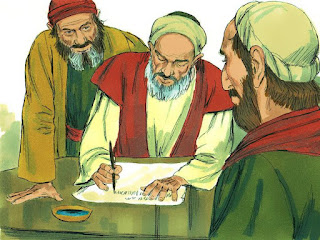 The “beloved” (Ac 15:25) St. Barnabas and St. Paul left Jerusalem, accompanied by Judas Barsabbas and Silas, and bearing the letter for the Church in Gentile lands from the Apostles and Elders in Jerusalem (Ac 15:22-29). Arriving in Antioch of Syria, they gathered the Church, read the letter, and the congregation “rejoiced at the exhortation” (Ac15:30-31).

Recall that the issue was whether the Gentiles who became believers in Jesus the Messiah, the Christ, had to accept the entire Jewish law, including its ceremonial and dietary provisions. This was an enormous question which Barnabas and Paul had dealt with over and over again.

Now the decision of the Apostles and Elders in Jerusalem, as written in the letter, was: “It has seemed good to the Holy Spirit and to us” – note the authority: God the Holy Spirit (consistent with the doctrine of the Blessed Trinity) and the Apostles (chosen by Christ) and Elders (some perhaps chosen by Christ, others by the Apostles as this is 19 years following Jesus’ ascension), God and humans together in the Church – “to lay upon you no greater burden than these necessary things: that you abstain from what has been sacrificed to idols and from blood and from what is strangled and from unchastity.” (Ac 15:28-29.) Circumcision and the remainder of ceremonial law is not required.

The book of Acts demonstrates the early Church’s process of reaching a decision in articulation of its faith: first human conflict and debate, but then also by means of discernment of God’s activity. Peter relates his experience, Barnabas his, and Paul his. All witnessed to what God had done through them among the Gentiles, and thus witnessed to God’s own choice (Ac 15:7, 12, 14). James then reflects on Scripture, but he does not say the witnesses’ words agree with the Prophets. Instead he says, “The prophets agree with this” (Ac 15:15). One commentator suggests this indicates “the text of Scripture does not dictate how God should act. Rather, God’s action dictates how we should understand the text of Scripture.” [1]

Another commentator suggests this “rejoicing” by the Church in Antioch indicates the decree of the letter was understood to not impose any additional dietary restrictions [2], other than those already required by Jewish standards for God-fearers (Lev. 17). These standards would already be known to any Gentiles who had come to synagogue, particularly as it was also the protocol of table-fellowship in the ancient world that one would eat only with someone who shared the same values. [3]

In 1442, the Ecumenical Council of Florence addressed the issue of whether this decree of Acts 15 remained in effect in the entire Church. The Council quoted 1 Tim. 4:4, “Everything created by God is good, and nothing is to be rejected when received with thanksgiving,” and declared: “The apostolic prohibition, to abstain ‘from what has been sacrificed to idols and from blood and from what is strangled,’ was suited to that time when a single Church was rising from Jews and Gentiles, who previously lived with different ceremonies and customs. This was so that the Gentiles should have some observances in common with Jews, and occasion would be offered of coming together in one worship and faith of God, and a cause of dissension might be removed, since by ancient custom blood and strangled things seem abominable to Jews, and Gentiles could be thought to be returning to idolatry if they ate sacrificial food.” [4]

So these dietary prohibitions were a matter of Church discipline for that particular time, place, and situation, and could be changed; they were not a matter of faith (dogma) which does not change.