These past many weeks we have taken this odyssey through the life of St. Barnabas. Now it is Christmas time. Wouldn’t it be lovely if St. Barnabas had left us some writing to inspire us this Christmas? To remind us of what Christmas was all about? Well, he may have.

“In many and various ways God spoke of old to our fathers by the prophets; but in these last days he has spoken to us by a Son, whom he appointed the heir of all things, through whom also he created the world. He reflects the glory of God and bears the very stamp of his nature, upholding the universe by his word of power.” Now here’s the Christmas part: the Son who is God also “partook of the same nature” as all of us children of God. That’s Christmas, God come in the form of our human flesh. Why? “That through death he might destroy him who has the power of death, that is, the devil, and deliver [us].” Say it again, “He had to be made like his brethren in every respect so that he might become a merciful and faithful high priest in the service of God, to make expiation for the sins of the people.” 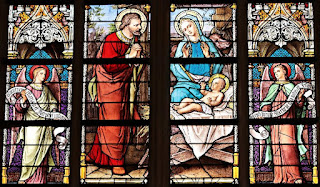 That’s Christmas. God taking on human form, our flesh, body and soul, in Baby Jesus. Why? To deliver us from the devil’s grasp, from eternal death. The choice whether to accept or reject it is ours. Christmas is a great time to reflect, meditate, and re-evaluate.

Now if the words quoted above sound familiar, yes, they are from the Book of Hebrews(1:1-3; 2:14-17). Didn’t St. Paul write that book? Perhaps, but we actually don’t know. For about the first 200+ years of the Church, the believers in the West thought Barnabas wrote it.

There has never been serious doubt about Hebrews’ inspiration, but there has been frequent doubt about authorship. St. Clement of Alexandria (roughly 150-211 AD), in the Eastern Church, believed it was either written by Paul or a disciple of his. Tertullian (roughly, 155-225 AD), in the Western Church, understood without any doubt that Barnabas wrote it. [1] Two centuries later, St. John Chrysostom (about 344-407 AD) in the Eastern Church, accepted Paul as the author, and in the Western church, St. Augustine (354-430 AC) and St. Jerome (about 349-420 AD) also accepted Paul as the author (they did communicate together). There are good reasons to still consider that Barnabas may be the author. [2]

So we can meditate on these words from the Book of Hebrews as though maybe they came from this extraordinary Apostle, St. Barnabas. We can meditate on what he may be speaking to us today about the meaning of Christmas. In fact, if we read more passages, we may be hearing just how this “Son of Encouragement” might encourage us today.

Dibby Allan Green
Reference
[1] In reference to 1 Cor. 9:6, from Tertullian, On Modesty: “For there is extant withal an Epistle to the Hebrews under the name of Barnabas – a man sufficiently accredited by God, as being one whom Paul has stationed next to himself in the uninterrupted observance of abstinence: ‘Or else, I alone and Barnabas, have not we the power of working?’” 3-Catena, for 1 Cor 9:6, http://www.earlychristianwritings.com/e-catena/1corinthians9.html - accessed 5/20/21.
[2] Reasons that the author of Hebrews might actually be Barnabas include the following: Both Barnabas and Paul were Pharisees and disciples of Rabban Gamaliel; they both evangelized over the same area in the middle East, both together and separately. However, Barnabas was a Levite and so had served in the Temple. He was a believer before Paul, and appears to have mentored Paul in their early years together. Sometimes Barnabas was the leader or treated as the elder, senior spokesman, although Paul was seen as more prolific speaker. Paul was the more direct, doctrinal, didactic teacher and wrote quite a bit of doctrine. Barnabas, “Son of Encouragement,” had a softer temperament, was more pastoral, exhorting and encouraging. Hebrews reads more like a homily or sermon than like a letter or teaching. Paragraphs of scriptural argument and discussion are followed by paragraphs of exhortation, and this pattern is repeated throughout. The portions of argument and discussion certainly have a Pauline flavor (which would be natural given both Barnabas’ and Paul’s training and shared missionary apostolate), but the exhortation style of writing is not reflective of Paul. Additionally, Paul’s audience was substantially Gentiles but including diaspora Jewish Christians. The audience for Hebrews seems to be Jewish Christians familiar with the Temple and its rituals, and the book strongly arguing the fulfillment of the Old Covenant, its sacrifices and rituals, in Christ, which would be a more natural argument for the Levite, Barnabas. (See Nicene and Post-Nicene Fathers [NPNF], Series II, Vol. 1, fn. 594 on pp.255-256, in reference to “The Acts of the Apostles,” of Book III, of Eusebius, Church History; Introduction to The Letter to the Hebrews, The Didache Bible, Ignatius Bible Edition (San Francisco: Ignatius Press, 2014), P. 1636.)
Originally published in the print edition of the Mojave Desert News  dated December 23, 2021.