Last week’s article concluded that about 55-56 AD, St. Barnabas was evangelizing inland in Western Asia (today’s Turkey), probably around Colossae, while St. Mark had remained with St. Paul, who was at the time probably imprisoned at Ephesus, which lies at the Western coast of the Agean Sea. Upon Paul’s release (probably early Spring 57 AD) from the “uproar” at Ephesus (Ac 20:1), he left for Macedonia (Ac 20:1-2). It was from there (2 Cor 7:5) that Paul and Timothy (2 Cor 1:1) wrote the second letter to the Church at Corinth in advance of Paul’s coming there. 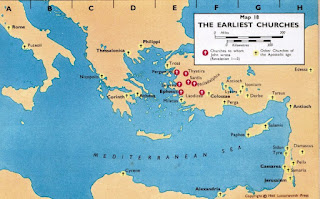 Now Paul writes that Titus will be coming to Corinth first (so likely carried this second letter to the Church) and, “With him we are sending the brother who is famous among all the churches for his preaching of the gospel, and not only that, but he has been appointed by the Churches to travel with us in this gracious work which we are carrying on....” (2 Cor 8:16-19.) Origin [1] and St. Jerome [2] think this “brother” is St. Luke, but we don’t have an indication in Acts that Luke was with Paul at that time; Luke joined Paul later in Macedonia upon Paul’s return from Corinth (Ac20:5-7, 13-15). St. Thomas Aquinas comments that while some say this is Luke, others say it is Barnabas [3], and this seems more probable. This unnamed brother is “famous among all the churches for his preaching of the gospel,” which easily fits the profile of Barnabas we have seen with his evangelization work in Antioch, Galatia, Cyprus, Corinth, and throughout Asia. Barnabas also had “instructions” (Col 4:10), typically indicating Apostolic authority, which may be implied in the “appointment” Paul refers to.

St. Paul also refers to an additional “brother whom we have often tested and found earnest in many matters,” which fits the profile of Paul’s relationship with John Mark – previously tested (Ac13:13; 15:36-40), but now with Paul in Ephesus (Col 4:10) and even his “fellow-worker” (Philemon 24). [4]

If these two “brothers” are Barnabas and Mark, then the reasonable picture would be that Barnabas had either returned back to Ephesus and traveled with Paul and Mark into Macedonia, or Paul and Mark met up with Barnabas along the way or in Macedonia. Later, Titus, Barnabas, and Mark then travel to Corinth with the second letter to prepare for Paul’s later arrival.