Easter is an octave of eight days to celebrate the blessings and mystery of the solemnity. Mass is Monday April 18 at 6:00 PM; Tuesday April 19 will be a Communion Service at 5:30 PM; and Mass is then on Wednesday April 20 at 9:00 AM, Thursday April 21 at 5:30 PM (which will be followed by Adoration of the Blessed Sacrament and Benediction), Friday April 22 at 7:45 AM, and Saturday April 23 at 9:00 AM.

As was done in the early years of the Church, each day of Easter Week we read the different Gospel accounts of Christ’s resurrection: Monday: Mary Magdalen and the “other Mary” from Matthew28. Tuesday: Mary Magdalen from John 20. Wednesday: disciples on the road to Emmaus from Luke 24. Thursday: the report of those disciples gave when they returned to Jerusalem that night also from Luke 24. Friday: Jesus’ appearance by the sea from John 21. Saturday: the summary of the Easter day events and Jesus’ commission to “Go into the whole world and proclaim the gospel to every creature” from Mark 16. Sunday, now “Divine Mercy Sunday”: Jesus’ appearance to the 12 disciples the following Sunday with the proof of his bodily resurrection to Thomas, from John 20.

Also beginning on Easter Monday, at Mass we will now read through the Acts of the Apostles for the entire 50 days of the Easter Season, ending on Pentecost. Acts is the story of the early Church’s growth and development under the guidance of the Holy Spirit in response to the commission and commands of the risen Lord Jesus Christ. 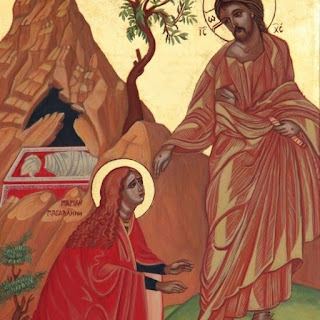 St. Augustine (354-430 AD; Sermon 243) quotes John 20:17 as Jesus saying to Mary Magdalene on that resurrection morning, “Do not touch me, for I have not yet ascended to my Father.” He notes the words could imply that Mary may only touch Jesus after his ascension – but Augustine asks, if us mortals can’t touch him on earth, who can touch him in heaven? He then explains: “This touching signifies faith; you touch Christ if you believe in Christ. I mean, even that woman who was suffering from an issue of blood said to herself, ‘If I touch the hem of his garment, I shall be healed.’ She touched with faith, and the health she was so sure of resulted.... The crowd jostles, faith touches.” (Cf. Mk 5:28-31; Lk 8:46.)

St. Augustine continues: “So it seems that this Mary ... represents the Church, which precisely then came to believe in Christ when he had ascended into heaven.” He says each of his hearers, and the Church spread throughout the whole world, represented by this one woman, would say that they came to believe in Christ “when Jesus had ascended to the Father.” He explains further: “What else is ‘the time I came to believe’ but ‘the time I touched’? Many worldly minded, materialistic people thought Christ was only a man, they had no idea of the divinity hidden in him. They didn’t touch him well, because they didn’t believe well. Do you want to touch well? Understand Christ where he is co-eternal with the Father, and you’ve touched him. But if you just think he’s a man, and think nothing further, then for you he has not yet ascended to the Father.”

May we each one “touch Christ” with deeper faith this Easter Season.