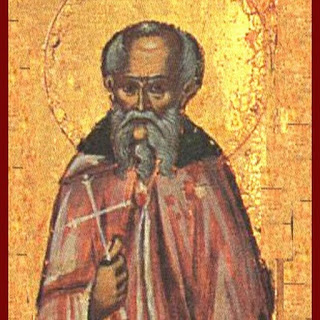 St. Melito, Bishop of Sardis (in today’s Turkey, about 50 miles NW of Ephesus) was born and raised Jewish, later converting to Christianity (we don’t know when or how). He was a follower of St. John the Evangelist, and likely also knew St. Polycarp and St. Ireneas of Lyons. Melito is reported to have been a bishop for 70 years, dying about 180 AD. There is a letter from 194 AD that speaks of Melito as one “whose whole walk was in the Holy Spirit.” He was considered a prophet in his time.

Long before Melito’s birth, Sardis had become Hellenized (Greek) under Alexander the Great, and so he was a Church Father who was completely at home in both Jewish and Greek cultures. He was the first to establish the canon of Hebrew scriptures for Christians, giving it the name “Old Testament.” While most of his extensive writings have been lost to history, one was re-discovered in 1940, “On the Passover,” or “On Pascha,” probably written around 167/168 AD. In this work, St. Melito’s gift of the Holy Spirit is clearly seen in his illumination of how the Old Testament was fulfilled in the New, and how the New Testament, in turn, illumined the Old. Indeed, he says the Old Testament could not be fully understood until the time of the New Testament made clear what God had been revealing in the Old all along.

So during this Easter Season, we might reflect this teaching from one of the very early disciples of the Apostles who can convey to us the understanding of the Apostolic Church about the Hebrew Passover as fulfilled in the death and resurrection of Jesus Christ. St. Melito’s “On the Passover,” is a homily delivered at the Easter Vigil Mass. St. Melito begins:

“First of all, the Scripture about the Hebrew Exodus has been read and the words of the mystery have been explained as to how the sheep was sacrificed and the people were saved.

“Therefore, understand this, O beloved: The mystery of the Passover is new and old, eternal and temporal, corruptible and incorruptible, mortal and immortal in this fashion:

“The law is old, but the gospel is new; the type was for a time, but grace is forever. The sheep was corruptible, but the Lord is incorruptible, who was crushed as a lamb, but who was resurrected as God. For although he was led to sacrifice as a sheep, yet he was not a sheep; and although he was as a lamb without voice, yet indeed he was not a lamb. The one was the model; the other was found to be the finished product.

“For God replaced the lamb, and a man the sheep; but in the man was Christ, who contains all things.

“Hence, the sacrifice of the sheep, and the sending of the lamb to slaughter, and the writing of the law – each led to and issued in Christ, for whose sake everything happened in the ancient law, and even more so in the new gospel.

“For indeed the law issued in the gospel – the old in the new, both coming forth together from Zion and Jerusalem; and the commandment issued in grace, and the type in the finished product, and the lamb in the Son, and the sheep in a man, and the man in God.

“For the one who was born as Son, and led to slaughter as a lamb, and sacrificed as a sheep, and buried as a man, rose up from the dead as God, since he is by nature both God and man.

“Such is Jesus Christ, to whom be the glory forever. Amen.”

Dibby Allan Green
Originally published in the print edition of the Mojave Desert News dated May 5, 2022, slightly modified.
Our Lady of Lourdes Catholic Church is located in California City, CA. Visit our website at ollcalcity.org.