Last week’s article began a series looking at what Jesus Christ and the Bible tell us about the world, particularly our current up-side-down world where lies abound, and how we should live in it. It all begins with Genesis 1:1: “In the beginning God created the heavens and the earth.” God also says all that He created is “good” (Gen 1:4, 10, 12, 18, 20, 25) and “very good” (Gen 1:31).

Now, really, is everything in the world good? How can it be? In this crazy, evil world?

I know a guy who regularly says, “Well, we live in dualism,” or that things are this way “so long as we live in a dualistic universe.” He’s part of a crowd of folks in the world who believe that in order for a god of light and good to create matter (or density), that there had to be a corresponding god of darkness and evil, and both must always be in balance. They believe nothing could exist without that balance of light/dark, good/evil. That’s their “dualism.” I hear it as a sort of fatalism, a big sigh of “well, it’s just that way.” 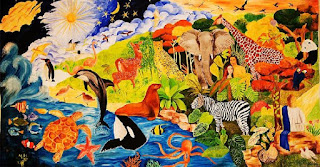 Interesting. There really is nothing new under the sun. Take St. Augustine (354-430 AD). He believed this sort teaching for nine years but then, after becoming a Christian, he firmly rejected it. He wrote, “For a Christian it is enough to believe that the cause of created things, whether in heaven or on earth, visible or invisible, is nothing other than the goodness of the creator who is the one true God, and that there is nothing that is not either himself or from him.”

St. Augustine says even the “pagans” (Greek philosophers) agree that God is all powerful and therefore supremely good. Such a God would not “allow anything evil to exist among his works were he not so omnipotent and good that he can bring good even out of evil. For what else is that which is called evil but a removal of good?”

Augustine illustrates this idea of evil as only being a removal of good in terms of normal bodily decay. “In the bodies of animals, to be afflicted with diseases and wounds is nothing other than to be deprived of health: the aim of treatment is not to make the evils which were in the body, such as diseases and wounds, move from where they were to somewhere else, but rather that they should cease to exist, since a wound or a disease is not in itself a substance but a defect in the substance of flesh.”

Did you catch that? Augustine is saying that evils such as diseases and wounds do not have an existence in themselves; they are just defects of the flesh. “The flesh itself is the substance, a good thing to which those evil things, those removals of the good, known as health, occur.” The good of health of the animal returns when the evil of disease is gone.

What if a diseased animal dies, hasn’t evil prevailed? No. The animal has died and ceased to exist, therefore the evil is also gone. The disease is a compromise of the animal’s health. When the evil of disease overcomes the animal and it dies, evil ends. It never had its own existence.

Yes, St. Augustine’s perspective is initially surprising. Evil as not having its own existence but only as removal of a good? Only good having existence? Yes, that’s it.

Then a whole lot of the world makes sense. The world IS GOOD. You understand why it is an absolute truth that “in everything God works for good with those who love Him” (Ro 8:28). God of inexhaustible power can make absolutely everything work for good – except for one big thing that remains within God’s goodness: free will. With the gift of free will intelligent beings (angels and humans) have the possibility of choosing against God’s goodness. That is the evil – when we choose against good, removing the good. More on free will next week.

But for this week, remember that in God’s creation and plan, God did not create evil, suffering, deception, or lies. The world God created, the world that exists today, is still 100% completely entirely ALL GOOD. The evil we see, we create, God only allows because in His greater power, He can and will bring greater good out of it all if we cooperate with God in love. Have hope! Do not be discouraged!

Dibby Allan Green
Originally published in the print edition of the Mojave Desert News dated July 14, 2022.
Our Lady of Lourdes Catholic Church is located in California City, CA. Visit our website at ollcalcity.org.