Have you been wondering what has happened to our world? How so much seems to have become upside down? Do we know what’s going on? Really? 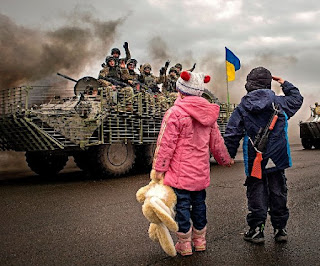 For example, many people in Ukraine are suffering and displaced, yes. Is it because of a war where Russia is the aggressor? Or is the Ukraine still part of Russia’s territory and Russia is doing a policing operation to stop the last eight years’ slaughter of thousands of Russian people living in the Donbas area? Or is the world really controlled by a cabal/mafia/deep state and Russia is now cleaning up a central stronghold? Or is it just another plan for oligarchs of both Russia and the West to reap billions more of wealth from the military industrial complex? It depends who you listen to, doesn’t it?

In mid-June the NY Times reported President Biden saying the U.S. has no awareness of what is going on in the Ukraine unless someone informs us, that we are not involved at all. The next week, on June 25th, the same NY Times reported that the CIA and special operations forces from NATO are on the ground in Ukraine directing a “proxy war” against Russia. So which is it?

We could go on with an enormous number of similar instances of discontinuities among what is said or seen. They’re everywhere.

No wonder many are asking: What is real? What is true? How do we know?

Philosophers say we learn all things through our five senses, that the senses give us our initial raw data. Then, with our intellect, imagination and memory, we conceptualize and reason and come to understanding.

That’s quite simple as to learning what an apple is and that it is good for food. But rather insufficient as to historic or current events where we have no first-hand experience. In such cases we must rely on the testimony of others to inform us. [That is, normally. God sometimes makes an exception and gives a person direct "infused" knowledge.]  That data from testimony is only so good as the credibility of the informer and his/her information. But assuming good credibility, yes, it is entirely reasonable for one to believe something based on testimony from others. Didn’t we all spend years in school being taught this way?

But, alas, there are also non-credible and uninformed person. Some are mistaken even if trying to be accurate, and some outright lie.

One of the reasons a lie is such a sin and evil is that when one deliberately falsifies (or even slightly misrepresents) the truth, it can disorient the other person as to their thoughts about the world, others, themselves, and God. Lies disorient us. They break our security, our understanding of the world, our understanding of life and people, and therefore of God and ourselves. Lies sever our connection to reality.

That’s where we are right now.

So who do you trust? Who is credible? Who can be believed? Who’s lying?

Let’s consider Jesus. He told Pontius Pilate that He came into the world to bear witness to the truth (Jn 18:37), and even said He IS the Truth (Jn 14:6). He said He and God the Father are one (Jn 10:30; 17:11, 21, 22). That’s the highest credibility – God’s testimony! That testimony will be the truth of what reality really is – including the reality of this world and what is going on in this world.

So while we currently live in a seemingly upside-down world, it might be useful over the coming weeks to take a look at what Jesus Christ and the Bible tell us about the world, how we should live in it, and what to expect from it. He tells us there will be tribulation and deception in the world. But He knows what is real. And He knows what we are going through.

We will start next week with a reminder that in God’s creation of the world, He created all things good and only good. That is reality. No deception. And no duality. Only good.

Question for thought: Unless God is only good and only creates good, how could Romans8:28 otherwise be true? Hope in God. He knows what’s real.