Meditation on the Two Standards of the Two Kingdoms.

Bob Dylan laid it out it in his 1980 Grammy award-winning song:

In his Spiritual Exercises, St. Ignatius of Loyola (1491-1556) has a Meditation on Two Standards. Ignatius had been a soldier. The “standard” is the banner held high in battle signifying the lord under whom the soldiers serve. Ignatius begins this meditation – and we might follow along – as follows: “This is the history. Here it will be that Christ calls and wants all beneath His standard, and Lucifer, on the other hand, wants all under his.”

Once you have the setting in your imagination, Ignatius suggests that in this meditation you ask God “for a knowledge of the deceits of the rebel chief and help to guard [yourself] against them; and also to ask for the knowledge of the true life exemplified in the sovereign and true Commander, and the grace to imitate Him.” 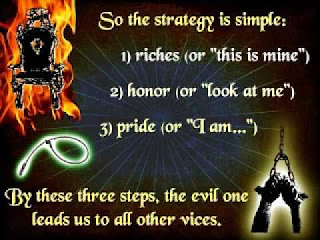 Then use your imagination to think of the standard of Lucifer. See him seated on a great throne of fire and smoke, his appearance inspiring horror and terror. He summons innumerable demons and scatters them throughout the whole world, to every city and place, every class of persons, with no one individual overlooked. Consider how Lucifer speaks to his demons, goading them to lay snares for people and to bind them. First they are to tempt us to covet riches, then to covet the empty honors of this world, and finally, then, to come to pervasive pride. Once these three are obtained, all other vices will follow.

Ignatius then encourages us to picture the “sovereign and true Commander, Christ our Lord.” See him standing in a lowly place on the great plain. His appearance is beautiful and attractive. “Consider how the Lord of all the world chooses so many persons, apostles, disciples, etc., and sends them throughout the whole world to spread His sacred doctrine among all men, no matter what their state or condition.” In addressing them, Christ is “recommending to them to seek to help all, first by attracting them to the highest spiritual poverty” – that is, in the sense Jesus says, “Blessed are the poor in spirit” (Mt 5:3) – and possibly even actual poverty if God so chooses them for it. In turn, this will lead one “to a desire for insults and contempt, for from these springs humility.” These are three counteracting steps to the devil’s enticements: “the first, poverty as opposed to riches; the second, insults or contempt as opposed to the honor of this world; the third, humility as opposed to pride. From these three steps, let them lead men to all other virtues.” (Christ’s call to discipleship, to virtue, is a narrow path, not a wide, easy road!)

Then Ignatius recommends we pray and ask for the grace to be received under the standard of Christ, “first in the highest spiritual poverty, ... second in bearing insults and wrongs, thereby to imitate Him better, provided only I can suffer these without son on the part of another.”

How do we live in this world? Today’s up-side-down world?

St. Ignatius suggests we meditate on the two standards, the two kingdoms. We do this by meditating on the appearance of each commander, on what each commander calls us to, with what end result. We don’t jump into battle to cast out demons from others. We go to battle begging for God’s grace to overcome the lusts of this world within ourselves, and then we will become an imitation of Christ our Lord. We can only overcome this world under His standard.

Originally published in the print edition of the Mojave Desert News dated August 11, 2022.
Our Lady of Lourdes Catholic Church is located in California City, CA. Visit our website at ollcalcity.org.