In our series reviewing what Jesus Christ and the Bible tell us about the world, we have so far reviewed that the world as created by God is good, although now in a “fallen” state because of the entrance of the evil which fallen angels (devil, demons) and humans brought into the world (Gen 3). Due to such rebellion, creation now suffers death (Wis2:24) and decay (Ro 8:20-23), and is under the power of the devil, its ruler (Jn 12:31; 14:30; 16:11; 2 Cor 4:4). But we also know God has a plan that is being worked out in history.

Remember the Hallelujah Chorus from Handel’s Messiah? "Hallelujah! for the Lord God Omnipotent reigneth. The kingdom of this world is become the kingdom of our Lord, and of His Christ: and He shall reign for ever and ever. King of kings, Lord of lords." (The words come from Rev 19:6; 11:15; 19:16; cf., Ps 2:8).

We also have to now make distinctions with the word, “world.” There is the fallen world subject to decay and condemnation, and the world as the material universe that is good.

The “Hallelujah Chorus” sings of Scripture’s promise that the good material world shall come entirely under the kinship of Christ leading to eternal life. (And thus the fallen, corrupt world, the kingdom of the devil’s rule, shall end.) 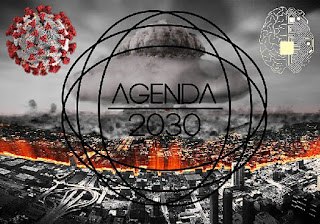 That’s the cosmic, eschatological dimension. OK, so what about today? What about this up-side-down world I now live in? What about elections, covid, “vaccines,” transhumanism, war, food supply, economy, social credit systems, WEF’s Agenda 2030, sex trafficking? Very real. Very serious. But there is another level. We need to realize this and not forget the other level.

Without negating the terrible seriousness of today’s issues, we have to look deeper to a more consequential, more far-reaching level. These issues are the means by which the kingdom of the enemy fights its war against the kingdom of Christ. And it is a war each of us is fighting every day. When we see deception and lies, when fear is promoted, we know the enemy is at work.

St. Paul says, “Though we live in the world, we are not carrying on a worldly war, for the weapons of our warfare are not worldly but have divine power to destroy strongholds” (2 Cor 10:3-4). “We are not contending against flesh and blood, but against the principalities, against the powers, against the world rulers of this present darkness, against the spiritual hosts of wickedness” (Eph 6:12). This is the battleground. This is the war.

Understanding that it is a war, and that at root it is a spiritual war, gives us confident hope in the outcome. We may lose a battle, but Christ shall win the war. His victory is certain!

Originally published in the print edition of the Mojave Desert News dated August 4, 2022.
Our Lady of Lourdes Catholic Church is located in California City, CA. Visit our website at ollcalcity.org.
Dibby Allan Green has a BA in Religious Studies (Westmont College, 1978) and MA in Theology (Augustine Institute, 2019), is a lay Catholic hermit, and a parishioner of Our Lady of Lourdes Parish.