Idolatry and the Enemy's Lies.

Lastweek’s article began to address what the Bible tell us about dealing with the evil and demonic in the world. One way evil deceives is under the lie of occult powers or other “gods.”

Let’s consider the experience of one person, we’ll call him Jack. Jack had no religious information in his family growing up, but he had some sense there had to be something more. By the time of his marriage, then birth of his first child, it just made sense that there must be a God.

Now Christianity recognizes that there are some truths about God that people can reach by natural, God-given reason. Jack is at this point. He has a general belief in God because his reason and life experience persuade him it must be so. So he seeks to live a good and loving life the best he can based on that understanding. Hopefully this general belief will enable his to inquire further and, in God’s grace, come to know the fullness of truth in Jesus Christ.

But what if, instead, at some point Jack is lured into exploring things like astrology, ouija boards, psychics, fortune telling, or seeking healing from spirit doctors, witch doctors, or mediums? What if someone gives him a talismans and words of a prayer. Or perhaps he stumbles into more. Although we may think we are too educated today for former pagan idol worship or the sacrificing of animals or children or people, unfortunately, that is not the case. Ancient superstitious and practices never stopped, they just became far less public.

All of this sort of thing is against reason and conscience. It is insulting to God. Of course it is! Jack has turned away from the God he knew in his heart was true, to instead trying to manipulate the world through magic, superstition, and false religious practices in order to gain some personal advantage, knowledge, or control. Now he is enslaved to the enemy.

It is the devil and his demons who tempts us all, just as last week’s article quoted the Bible’s words that these are the rulers of this world. They are very real, and their agenda is to enslave us to them. We have human slavers on many levels, but underneath every one is the devil and his demons. When we buy into such idolatrous and superstitious practices, we willingly are signing up for slavery to demons (Gal 4:3, 8-9). 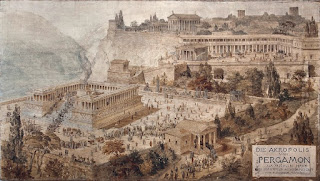 Every pagan sacrifice or worship (idolatry) is made to demons, and to participate is to partnership oneself with demons (1 Cor 10:20; cf., Ps 96:5; Ac 7:41-42). St. Paul even says that covetousness (the envious desire of persons or possessions) is idolatry (Col 3:5; Eph 5:5; cf., Mt 6:24). Jesus also connects idolatry with the demonic when he dictates a letter to the Church in Pergamum and says that the people there dwell “where Satan’s throne is” and “where Satan dwells” (Rev2:13). That appears to be a reference to the Great Altar in Pergamum which depicts a cosmic battle between Zeus and Satan. The altar still stands today. The pagan altar, Jesus says, is Satan’s throne and where Satan dwells.

God says something similar towards the beginning of the Bible at the time of the first Passover and the Exodus. God tells Moses that in the death of the Egyptian first-born sons, that He is executing judgment on Egypt’s gods (Ex12:12). Later God strongly warns Moses that after the Exodus, when the people come into Canaan, they are to absolutely have nothing to do with the pagan “gods” there but to utterly overthrow them (Ex 23:24, 32-33). And how do the Ten Commandments begin? The commandments that are to rescue us from the demonic enslavement of idolatry in all its forms? “You shall have no other gods before Me. You shall not make for yourself a graven image ...; you shall not bow down to them or serve them.” (Ex 20:3-4; Deut 5:7-8; cf., Ex 23:25.) These commandments are forever valid, always, everywhere, no exception.

To live in this world, we must not let ourselves be deceived. We must not buy into the enemy’s lies. The foundation of our hope in this world can only be in Jesus Christ.

Originally published in the print edition of the Mojave Desert News dated September 1, 2022.
Our Lady of Lourdes Catholic Church is located in California City, CA. Visit our website at ollcalcity.org.